A+ A-
Print Email
He ran out in tears and had to be consoled by course mates. 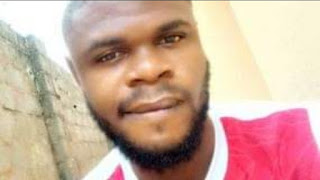 Enya Egbe, 26, scurried out of his Anatomy class at the University of Calabar in tears, after discovering that the corpse he had been asked to work on was that of a friend.
The BBC reports that the incident occurred seven years ago on a Thursday afternoon.
Egbe recalls that afternoon vividly and how he gathered with fellow students around three tables with a cadaver laid out on each.
Minutes later, he screamed and fled the laboratory.
The body his group had been asked to dissect was that of Divine, his friend of more than seven years.
"We used to go clubbing together. There were two bullet holes on the right side of his chest," Egbe says.
Oyifo Ana was one of the many students who ran out after Egbe; and found him weeping outside.
"Most of the cadavers we used in school had bullets in them. I felt so bad when I realised that some of the people may not be real criminals," Ana says.
She adds that one morning she had seen a police van loaded with bloodied bodies at their medical school, which had a mortuary attached to it.
After Egbe fled the lab, he sent a message to Divine's family who had been going to different police stations in search of their relative after he and three friends were arrested by security agents on their way back from a night out.
The family eventually reclaimed his body.
A worrying trend
The BBC reports that Egbe's shocking discovery highlights both the lack of corpses available in Nigeria for medical students and what can happen to victims of police violence.
More than 90% of the cadavers used in Nigerian medical schools are "criminals killed by shooting", according to a 2011 research in the medical journal 'Clinical Anatomy'.
This means that these cadavers were suspects shot dead by security forces. Their estimated ages are between 20 and 40 years, 95% are male, and three out of four are from the lower socio-economic class.
"Nothing has changed 10 years later," says Emeka Anyanwu, a Professor of Anatomy at the University of Nigeria, who co-authored the study.
Posted by: Globalnet
Tags: News