Home » News » Governor Zulum: Electricity will be restored in the next 30 days in Maiduguri

Governor Zulum: Electricity will be restored in the next 30 days in Maiduguri 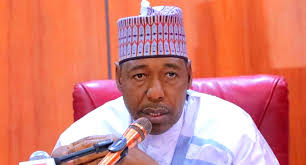 Prof. Babagana Umara Zulum, Governor of Borno has said electricity will be restored in the next 30 days in Maiduguri, capital of Borno.

The governor gave these assurances on Tuesday while presenting the 2022 appropriation bill at the Borno State House of Assembly.

The capital city has been without electricity for almost a year now.

The blackout was following the destruction of electricity transmission towers along Maiduguri-Damaturu by the Boko Haram insurgents in January.

The Government of Borno tried several times to fix the light by supporting the cost of repairs with, reportedly over a hundred million, but the insurgent kept sabotaging every effort made.

YERWA EXPRESS NEWS has reported how the blackout has continued to affect residents, businesses as well as some government agencies whose works solely rely on power.

Public institutions like the University of Maiduguri Teaching Hospital exclusively revealed they spend over 10 million Naira on a monthly basis in fueling power generators alone.