Following the total blackout for the past year in Maiduguri and its environs, the Vice president, Prof. Yemi Osibanjo has announced that a 30 megawatts solar system will be installed in Maiduguri, the Borno state capital. 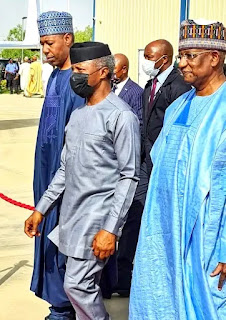 According to him, this is imperative so as to achieve the Economic Sustainability Plan, ESP hitherto approved by President Muhammadu Buhari.

Recall that the Boko Haram sect repeatedly vandalized the transmission towers since January 2021 which affected T152 and T153 electric towers on Maiduguri–Damaturu 330 kilovolts, though an alternative source of 11kva line was provided early this year along the same route, only about 10% of the population were connected with interrupted supply.

Perturbed by the situation, the vice president who was at the University of Maiduguri during the official hand-over of the Muhammadu Indimi International Learning Centre to the management of the university on Thursday announced that the solar power project is the best option for Maiduguri.

According to Osibanjo, his office, the Borno State Government and Yola Distribution Company are currently working assiduously to ensure the establishment of the solar power plant in critical areas.

He explained that six different stations will be constructed in different locations of Maiduguri to argue the existing grid/supply, and protect against any kind of energy sabotage.

He also commended Muhammadu Indimi for donating the centre which was constructed at the cost of N2.5 billion to the University.

“The University of Maiduguri is an excellent centre of learning and research, it has produced well to do individuals like the Group Managing Director of Nigeria National Petroleum Corporation, Mele Kolo Kyari, the senate president, Ahmed Lawan and of course, our own governor Babagana Umara Zulum who is here with us today.

"Indimi’s philanthropic efforts especially in revamping the education sector is an inspiring one, and I urged other meaningful individuals and philanthropists to emulate.” The VP said.